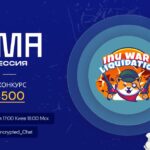 This is a text version of our AMA in a chat with the Inu Wars project, a meme game that was created in the image and likeness of the cult game Worms Armageddon.

The project includes many trends, such as NFT, Play2Earn, memes(Inu), staking, NFT-staking, grinding and directly multiplayer game. At the project in January it is planned to open staking, and in February the first INO event and the launch of an open beta test of the game.

Incrypted: Please introduce yourself and tell us about your team, what is your background?

Inu Wars: With pleasure. We have a medium sized team, including more than specialists of various calibers and directions. What is important, the team includes 5 Senior Developers with more than years in corporate work. We are located in Latvia, Riga. For 5 years we worked as an IT company, providing various services from development to marketing to various clients around the world. In September 2000 they launched their first crypto project, which shows itself quite successfully and is also at the stage The beta test is moonpoly.io, I think many have heard of it. So the background also includes the experience of developing games in the crypto industry and we are improving every day!

Incrypted: Question from the Incrypted team. How often do you play games in general? Why did you decide to create a game project?

Inu Wars: There is not much time to play, but there is a lot of experience in this very, very much 25. Here Artem will tell more, since he is the main game designer for Inu Wars.

Of course, I think people go to IT in general after they see what interesting things can be created in this area, but the reality is cruel and working on the creation of various projects, websites, software and other orders. We often found an hour to relax and play different games with the team.

So we ended up creating simple games within the team at the beginning, and later to our first project Moonpoly!

I also want to add that in the p2e segment there are a lot of monotonous games only with a grind, which are simply not interesting. Good multiplayer games are objectively few. Therefore, we decided to take up this particular segment tightly and bring our ideas to it.

Incrypted: Great, then please tell us in general terms about your project!

Inu Wars: Inu Wars is a multiplayer game, I think those who managed to watch the trailer of the game remembered the good old Worms. In general, the game mechanics at the start will not differ much, but we already have a test game mode in development, where the battle is not turn-based, and all players can perform actions at the same time.

Of course, reviving the old idea, we took into account modern realities, so the game will be available: Seasons, a system of ranks and divisions, guilds, different game modes such as the royal battle, one against all. Team battles and also a couple more modes are possible that we don’t want to announce yet, in order to leave something for our announcements.

The game also includes a lot of trendy chips like NFT, Play 2 Earn, an active part games and passive income and much more.

Incrypted: Subscribers are interested in naming . “ People have a very biased attitude towards projects with a prefix like: inu, mun, dogi. Why did you choose this name?”

Inu Wars: Don’t worry. We have not created a meme token. However, this is just a marketing ploy. It’s no secret that there is a certain part of people in the crypt who invest and fly into growing projects with trendy names. We could take anything as a basis, but we settled on the Inu dogs. To take worms would be a severe plagiarism, but we take this very seriously and have a lot of experience and good consultants. Therefore, there will be almost nothing from the usual old game 768 of the year, except for game mechanics, which will also be improved. So the name is just an additional trigger that can be used to advantage in marketing in the future.

Incrypted: Before we get into the gameplay, please tell us about your partners…. Who are the main partners and investors of your project? What partnerships are being planned? Could you tell me more about this?

Inu Wars: We didn’t raise any funds in the presale or private round. All sales were open to the general public. However, we held a large number of AMA sessions and collected a large number of expert opinions from various, large, foreign influencers and admins, with whom we maintain good relations and have agreements to promote the project further at various important stages of development. As for the upcoming partnerships, this will already be a small insider, because we did not announce this earlier. But I can say that we are currently negotiating with Unity to use their servers to support the game, with various crypto wallets, other Play 2 Earn projects, and we are also going after the launch of the Beta versions of both of our projects to merge the audience for cross marketing, which practice is a very good move.

We also have very good consultants for project development and promotion in various local markets, such as Russia and the CIS, Brazil, Turkey and the USA.

Incrypted: Will the game have a story campaign? Will “Inu Wars” be a complete game system, or is it a single project?

Inu Wars: Regarding the story campaign, our copywriter, together with the designers and game developers, created the story, but this plot will be used in seasonal quests, so playing in the first season by completing daily quests, you will find out why the Inu war actually started and who is behind it. If the public appreciates the plot, it will be continued for the second season. As such, there will be no single player game, there will be a training ground where you can try all types of weapons for free and learn how to use them effectively. you logo with the words Inu Wars Liquidation is the first part of the Inu Wars game. We don’t want to guess, but in the future we hope to release the successor to Inu Wars in which you can use all the weapons and NFT skins from the first game.

Incrypted: Will there be a single player mode? Or only multiplayer?

Inu Wars: At the moment, all forces are thrown into creating an exciting multiplayer. The ability to play against AI will be added later, but it takes time.

Rewards in the single player game will be heavily limited, for obvious reasons

Incrypted: Will the gameplay be cross-platform or will those who play on mobile also only play with mobile players?

Inu Wars : In our team there are disputes to this day, cross play or not. The launch of mobile devices is planned in the spring, but in general, we believe that the user himself should n decide whether to play only against users on equivalent devices or not, so the option to disable crossplay will be available. But this will certainly increase the queue and waiting time in certain game modes.

Since the game is written in Unity, it will not be difficult to transfer it to mobile devices and we understand how large the audience is from mobile devices. Of course, we will not miss this chance.

Incrypted: In general, what game Do you plan to introduce modes?

Inu Wars: Yes, many different modes are planned and there are many ideas. But the initial task is to develop a full-fledged version of the game. Plans include: Battle Royale, Guild Wars, Death match, 1vsAll and we plan to do something similar to the mission of escorting cargo, which you can see in many modern games, such as Overwatch.

There are a lot of ideas , but first we want to show you the Beta in February to get feedback from users, and decide which modes will be the main ones!

We also plan to hold seasonal tournaments with big rewards. For example, the first tournament is planned after the launch of the full version of the game and the reward for the season will be 1 BTC.

Incrypted: Tokenomics is an important factor that an investor pays attention to before investing in a project. Our community has several questions on this topic: – First, please tell us about the utility of the token, and what are the benefits for token holders? Does the project have a buyback-and-burn program that supports long-term stability and growth in the value of the $IWR token? What will allow players to focus on the game and not worry about possible fluctuations in the price of the token?

Inu Wars: Of course! By utility:

Regarding the Burn program: As I wrote above, 1.5% of each transaction on the marketplace will be burned. We also plan mechanical burning once every 2 months, and the current program involves burning half of the capitalization (20/120M), after which a decision will be made on further plans in this direction.